My finger follows the Northlands Twin Coast Discovery route on the map. It’s been fun planning this trip to the ‘far north’ and now, behind the wheel of my rental, I’m off - first stop the coastal village of Tutukaka.

Waking to sunrise it’s not long before I’m checking into A Perfect Day get on their boat with a snorkel, fins and wetsuit ready to visit the world famous marine sanctuary, Poor Nights Island.

Once there the views above and below the water are breathtaking.  Schools of fish divide as they swim past me, while others carry on feeding on the food they have trapped up against the islands volcanic cliffs which continue straight down to the floor of the Pacific Ocean.

After exploring the world’s largest and beautiful sea-cave, Riko Riko and other islands which are part of the reserve and watching the gannets diving into the sea helped make this, for me, a ‘perfect day’ just as the company is called: over the next two weeks water and history feature high on my to-do list.

I visit the birthplace of New Zealand – the Waitangi Treaty Grounds. It’s not only historic and beautiful but also set in lush native bush and has guided tours and cultural performances night and day 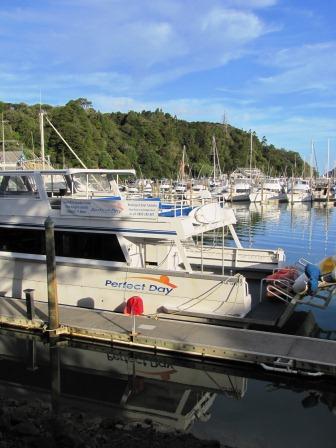 Soaring skywards with the Flying Kiwi’s parasail, New Zealand’s’ highest, has my adrenaline flowing. The take-off and landing was smooth and gentle and the views over the Bay of Islands was great despite my fear of heights and that I was flying single, not tandem or triple.

Still in the bay, I went dolphin watching but saw a pod of Orca, killer whales, feeding - no wonder the dolphins where hiding. However, it seems their genetic warning system about this top-of-the-food-chain mammal, has not caught up with the fact that, in New Zealand, orcas prefer sting-rays.

This was the first area settled by Europeans from the end of the 18th century and The Duke of Marlborough in Russell is the centre of this history. 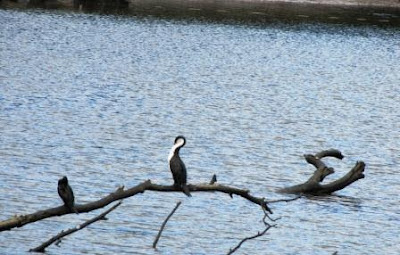 My days fly and with a I-must-come-back-and-do list, I set my GPS for Kerikeri where I stay in eco-cottages nestled in the award-winning Wharepuke Subtropical Gardens and later arrive at Cape Reinga. It’s called Te Rerenga Wairua in Maori, this is a special place, culturally and ecologically, and many visitors from around the world reduce their carbon footprint by planting a native tree there.

Back down the twin-coast highway my next stop was at a Hokianga hotel right on the waterfront and within sight of the heads that the great Polynesian explorer, Kupe, sailed through many generations ago. If the Bay of Islands is the cradle of Pakeha history, this whole area is the cradle of Maori history.

Two of the activities here celebrate both nature and Maori culture.  Footprints Twilight Encounter was very special and even Lonely Planet rated it highly (Code Green Experience of a Lifetime).  One evening I joined one of Kupe’s descendants, and six other travellers, on a guided walk to the two largest kauri trees in the world. Being in the forest at night was very special for sounds and sights.

The next day another of Kupe's descendants stood with me on top of the giant sand dunes on the opposite side of the Hokianga Harbour regaling me with stories of the past with its intrigues, wars, deception and fun – even better, only three people fit in the dune buggy so it’s an exclusive trip!

Further south on State Highway 12 is the Kauri Museum.  This had been given such great press by travellers I’d met along the way that it had a lot to live up to. One of the amazing things I find about this world-class, award winning, museum is that it is administered by a charitable trust. Showcasing the very best of the Kauri Coast, it not only has amazing pieces of Kauri gum arts and crafts but also magnificent antique furniture and working machinery - whatever your interests, social history, art, nature, science, furniture, jewellery, machinery, culture, the Kauri Museum and its history of the beautiful golden amber gum will keep you occupied for hours. Tell them I sent you!
For more stories about New Zealand, and the rest of the world follow travel my blog as well as this one!

Posted by Heather - the Kiwitravelwriter at 11:27 AM No comments: Links to this post

This will be followed David’s recipe for becoming a food writer, after which we’ll give him a good grilling about the sticky bits (open Q&A: BYO questions) 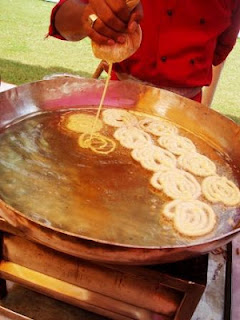 Register with and send cheque to: Helen Davies, Travcom administrator, at 2B Pukehana Avenue, Epsom, Auckland 1023. Ph. 09 624 5707 or email: helen.daviesATclear.net.nz

This event has been organised by the Wellington branch of the Travel Communicators’ Association. For further information, please contact one of the local committee:
Judith Doyle (judith.doyle AT xtra.co.nz)
Heather Hapeta (heatherhapeta AT orcon.net.nz )
Sarah Bennett ( sarah AT bennettandslater.co.nz )
Posted by Heather - the Kiwitravelwriter at 11:45 AM No comments: Links to this post

My long-awaited, long promised book on sucicide bereavement is now available for e-readers - hard copies are available directly from the author - Heather Hapeta


Have just been sent this " Heather, you were born to write this book. Tears have been rolling down my face for the last hour, but I've also been cheering. For you, for your courage, your persistence, your bossiness, your in-your-face-ness. I'm so glad you wrote the book, and I hope that others will be comforted and strengthened by reading it."

Buy this book from Smashwords (all formats) here.  It is also for sale here from  Amazon. 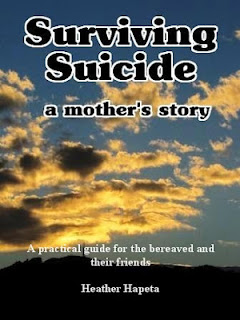 Posted by Heather - the Kiwitravelwriter at 3:48 PM No comments: Links to this post