Great place to visit: an 18k walk or by the tractor trip are the best way.

Posted by Heather - the Kiwitravelwriter at 4:35 PM No comments:


The narrative focuses on an elderly couple, Anne and Georges, who are retired music teachers with a daughter who lives abroad. Anne suffers a stroke which paralyses her on one side of her body.


I loved this film, harrowing though it was in parts. it is a beautiful example of French understatement, low key and fabulous camera-work, and a thoroughly satisfying, thought-provoking story.


Awards the film has won:


Selected as the Austrian entry for the Best Foreign Language Oscar at the 85th Academy Awards.


National Society of Film Critics’ Awards - it won awards for Best Film, Best Director and Best Actress.
British Academy Film Awards - it was nominated in four categories, winning for Best Leading Actress and Best Film Not in the English Language and Emmanuelle Riva became the oldest person to win a BAFTA.


At 85 years, Emmanuelle Riva is the oldest Academy Awards nominee for the Best Actress in a Leading Role.


César Awards it has been nominated in ten categories, including Best Film, Best Director, Best Actor and Best Actress.

PS and yet more awards: http://www.guardian.co.uk/film/2013/feb/25/amour-oscar-foreign-michael-haneke


See more about Amour on Wikipedia
Posted by Heather - the Kiwitravelwriter at 5:44 PM No comments:

Have you been to Waitangi - on Waitangi Day? 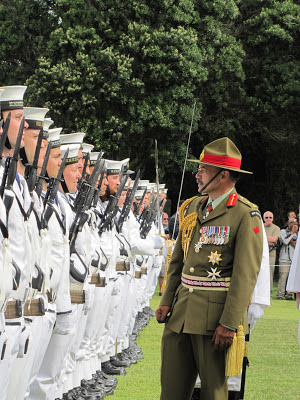 New Zealand is in my blood and bones, in my DNA. My family threw off the shackles of class; land-clearings in Scotland; potato famines in Ireland; and tin mine closures in Cornwall – arriving in New Zealand in the mid-1800s.


The 1840 Treaty of Waitangi is what allowed us, and every migrant since,  to come to New Zealand and I was thrilled when Norman Kirks 3rd Labour government made Feb 6th a public holiday. The 1970s were a time of huge changes in race and gender issues in NZ and I, a 5th generation kiwi, was glad to be a passionate part of the processes.


That being so, I loved revisiting Waitangi last year for the celebrations and commemorations of this our country’s founding document and next year I’m planning on attending the day’s celebrations in Okains  Bay on Banks Peninsula.  Annually I attended the events in Christchurch but now actively encourage others to do something to acknowledge our national day. I’d love all new Zealanders to attend Waitangi Day, in Waitangi, at least once in their lifetime. It’s a great day there, but please just start by saying “Happy Waitangi Day.”


Michael King, in The Penguin History of New Zealand says “And most New Zealanders, whatever their cultural backgrounds, are good-hearted, practical, commonsensical and tolerant. Those qualities are part of the national cultural capital that has in the past saved the country from the worst excesses of chauvinism and racism seen in other parts of the world. They are as sound a basis as any for optimism about the country’s future.” page 520.


There will always be conflict and tensions around the day in Waitangi, they are legitimate and desirable debates that define a democracy, and for us, necessary.  Our Treaty was ignored by one partner in the agreement for over a hundred years then, as a result of our national protests and debate over apartheid, we finally looked into our own backyard. We still need to be looking and examining it – we have made much progress but, just as feminism and the 1970s progress has gone backwards, so too do we need to ensure we continue moving forward in our nation’s human rights and our legal and moral obligations agreed to by the signatories of document.


As Norman Kirk said about our holiday it is designed to give us “a full sense of nationhood” and I encourage you to celebrate our nation by at least saying to your friends and family, and people whose paths you cross on the day “Happy Waitangi Day” as we continued to build our nation.
Posted by Heather - the Kiwitravelwriter at 8:10 AM No comments: