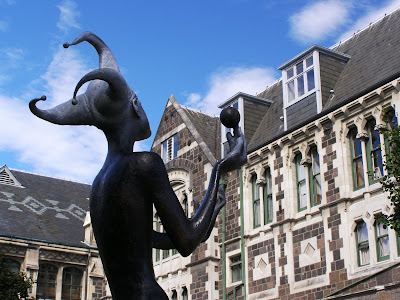 Walking through the Square, I come face to face with the giant purple sperm, Darwin, now with my mind fertilised, I am ready to continue exploring all that SCAPE has to offer.
Over six-weeks, the sailing-in-the-sky boat, sharing intimate moments with Captain Cook, cycling in the Art Gallery, or pondering on any of the other exhibits, will surely revitalise not only me, but the public art debate we often have in Christchurch. Many laugh at our passionate pleas for or against various art-works, but at least we are engaged: a sign of a healthy city I suggest.
However, temporary installations provide something very different to permanent pieces. Who decides what should be commissioned for our permanent public art collection and where is it to be placed? What is the value of outdoor art, and what part do the public have in this process?
Christchurch has a rich heritage of public art – dating back to the Godley statue in 1867 – and includes fountains, murals, statues and sculpture. As an inner-city resident I value them all. Naturally, being a Cantabrian with an opinion, I think some are in the wrong place.
A recent example is the newest piece of permanent art in Christchurch (cnr High, Colombo and Hereford Streets). Flour Power is a fine piece of work but what is a bunch of tall wheat stalks doing on a site that was once a swamp? How is that relevant to Christchurch? It’s the plains that grow the grain not here on our old wetlands and it’s on the edge of the city that I suggest is where it belongs: then put a colourful pukeko in Stewart Plaza. I wonder at the silence: no cries of glee or disapproval. Surely good art creates conversations. Have we stoped debating our public spaces?
Our Chalice is a great piece of work although I, and many others, thought it too was in the wrong place. However I’m revising my condemnation now because that at least has relevance to the site: depicting leaves of plants that once grew in the area: relevance to an area and site is surely the essence of permanent pieces. An example is The Fool outside the Court Theatre, a fitting combination of great public art with its site.
According to Wikipedia ‘the term public art refers to works of art (in any media) that have been planned and executed with the specific intention of being sited or staged in the public domain, usually outside and accessible to all. The term is especially significant within the art world, amongst curators, commissioning bodies and practitioners of public art, to whom it signifies a particular working practice, often with implications of site specificity, community involvement and collaboration.’
Public art pieces are also indicators of cultural vigour and show visitors, as well as us, about the level of our artistic and cultural excellence – or otherwise. If this is so, should we give precedence to local (or locally born) artists? What are the benefits and detriments of this?
What about the different cultures in the city? How do they participate in this artistic conversation? Where is their art?
Christchurch is enriched by the variety of the works of art in public spaces and as a child I recall fondly my parents spending a quiet evening driving us around the inner city to look at the art – our favourite was the colourful fountain in Victoria Square, when it was still a street leading to Papanui – and because of those memories I still enjoy my just-about-daily walk through the area.
It’s now time to use my SCAPE map, check-out the temporary installations, contemplate what they mean to me, and which I believe could become permanent public art in our outdoor, city-wide gallery. Captain Cook, here I come.
©Heather Hapeta 2008
Posted by Heather - the Kiwitravelwriter at 10:03 AM No comments:

Brain power via the web?

"Internet use 'good for the brain'

Areas activated by reading a book in the brain of an experienced web user
For middle aged and older people at least, using the internet helps boost brain power, research suggests.
A University of California Los Angeles team found searching the web stimulates centres in the brain that control decision-making and complex reasoning."

That’s great for me …. Its hard to believe its less than twenty years ago that I first touched a computer, that I was then 51 when I got my first email address, using libraries computers and then a year later my first laptop! Now I find at 63 I often am the person to help others sort out issues or functions on their computer and have my own website. (http://www.kiwitravelwriter.com/) 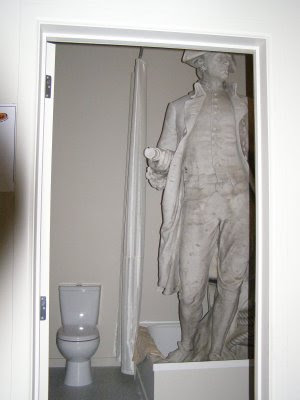 Sure he’s really, really old, and sure he seems hard and cold – almost as if he’s made from marble. But I have to tell you - and I’m not normally a girl who kisses and tells but . . . this afternoon I stood by and watched – even photographed – one of the worlds’ well known, famous men as he had a shower.
From the living room, (with its interesting books on the bookshelf) and with the door wide open I could see his toilet (well bathroom if you are Nth American) as well as the bath with a shower overhead, and a bathmat hanging over the edge of the bath.
He took no notice of me or my camera – perhaps he really does have an alabaster heart, but up close he seems a fine figure of a man. Usually I have to gaze upwards as he balanced on a plinth and I liked getting up close and personal – I even noticed a crack in his crotch. (This seems somewhat appropriate!)
Unfortunately, if you too want to spend time in such intimate surroundings with Captain James Cook, explorer extraordinaire, you need to rush to Victoria Square, Christchurch, New Zealand in the next month.
This installation art – Endeavour by Tatzu Oozu, Japan – is part of the 5th SCAPE Christchurch Biennial of Art in Public Space.
.
Posted by Heather - the Kiwitravelwriter at 5:23 PM No comments:

POSTCROSSING - heard of this?

The goal of this project is to allow people to receive postcards (and stamps for some) from all over the world, for free. Well, almost free! The main idea is that: if you send a postcard, you'll receive at least one back, from a random Postcrosser from somewhere in the world.

Why? Because there are lots of people who like to receive real mail. The element of surprise of receiving postcards from different places in the world (many of which you'd probably never have heard of) can turn your mailbox into a box of surprises - and who wouldn't like that?

Check it out at http://www.postcrossing.com/
Posted by Heather - the Kiwitravelwriter at 8:43 AM 1 comment: 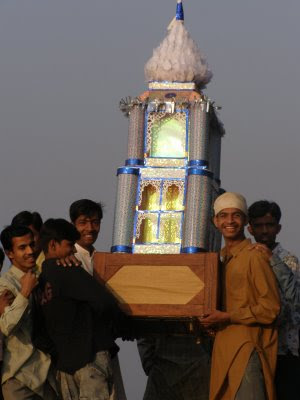 Once again I see the dangers of travel. Not the rare physical danger of airline or vehicle crashes; not the occasional danger of being robbed or becoming sick, but the every-day common danger of your heart getting to know people and places. People we would not usually met. Each week, hearing of train accidents, deaths in the Middle East, and riots in India, bombs, wars, earthquakes, or floods I am very conscious of that emotional danger.

Geography was of more interest than history at school. One could have a stab at answering questions if I knew a couple of other facts. Distance from the equator could give clues to temperatures and climate. Mountains, plains, rivers all added up to some understanding of a place that dates and historical facts didn’t - well for me as a teenager.

Now travel has given me a different perspective. Geography remains important, history helps with understanding people and the two, combined with travel experience, gives me a sense of, not exactly ownership or belonging, but something rather like kinship, I’m attached - I leave a bit of me in every place, and take some of the place away with me

To me this feeling of human-oneness is particularly acute at times of high emotions; small countries achieve a goal; overcome an obstacle; a national team wins; and in particular, really acute in times of national pain.

My first real experience of this came after I’d been to Ireland when shortly afterwards ‘the troubles’ began again. I was devastated that the wonderful little city of Londonderry (or Derry, depending on the map consulted) was yet again the centre of violence. Streets I’d walked down were now dangerous. That people I had maybe spoken to or walked past were now dead or injured had me crying in front of the TV or newspaper.

Turkey and Greece had earthquakes, people in Israel and Palestine killing each other, years ago London had rubbish bins removed from the street for fear of terrorism, New York and the New Yorkers I love were devastated and traumatised, monsoon floods happen in Asia, and in Egypt, fabulous country and generous people, is grief stricken with deaths from buildings collapsing, and Indian pilgrims die during a festival.

What ever the cause, I think of the diverse people whom I have come to know, love, judge and compare and empathise with their pain. Yet what can we do to ease that pain? Nothing. The one thing that would help - having loved ones live again - is way beyond anything we can do.

However maybe travel-writing that gives the texture, flavour and smells of a place helps bridge that gap between us and them. After all scenery and monuments are the same on everyone’s photos. It’s our experiences that provide the difference.

Travelling, or reading about travelling, help us realise people are not like those presented in the headlines of our papers or in the sound-bites of radio or television. Young or old, male, female, Christian, Pagan, Muslin, or freethinker as a Japanese friend describes herself, we’re all part of the human family and when a family member is in pain we feel it.
Posted by Heather - the Kiwitravelwriter at 11:03 AM 1 comment: