Attending as guests at the opening night of the UK production of Annie – one of the best-loved, family musicals I believe the two of us were the only people there without knowing a child in the cast – or one who had auditioned!

Opening at the St James Theatre, Wellington, to rave reviews, some of which said:

The show features a host of familiar faces from British TV and my co-guest often said “oh she’s on XYZ or he’s from ABC’. Leading the cast is the hilarious star of stage and screen, Hi-de-Hi comedian Su Pollard, who I did recognise, who is the alcohol-soaked Miss Hannigan, headmistress of the hard-knock New York City Municipal Orphanage.  Playing the kindly billionaire businessman Oliver ‘Daddy’ Warbucks is David McAlister while the role of former US President Franklin D Roosevelt is Frazer Hines.

The set and singing (a little loud which distorted the words for those of us, like me, who didn't know them) were almost outshone by Sandi: everyone’s eyes were on the dog – a real scene stealer! My fellow guest said on leaving ‘that song is going to keep repeating on my head’. It didn’t become an earworm for me, but I’m sure lots of young girls with dreams of the stage will be singing it into hairbrush microphones over the next few days and weeks.

See more about Annie here
Annie plays in Wellington until 8th June then in Auckland for a month. 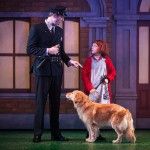 Posted by Heather - the Kiwitravelwriter at 7:57 AM No comments: