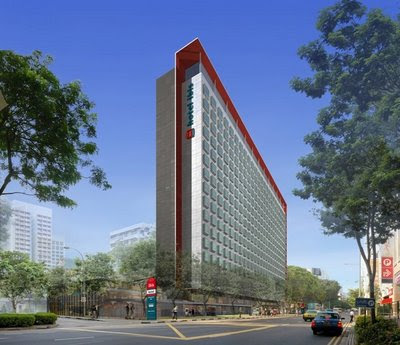 I have have been sent infomation about the new ibis that is to set the standard for chic-economy hotel accommodation in Singapore - which is set to get its first internationally branded economy hotel when the ibis Singapore on Bencoolen opens for business on February 24, 2009.

Famed food celebrity and renowned father of Singapores food culture KF Seetoh will be on board for the hotel’s restaurant TASTE.

The hotel will debut with an opening rate of S$148 per room including complimentary Wi-Fi access.

The ibis is ideally located on Bencoolen Street in the heart of the Bugis - cultural and art district - and within easy reach of the popular Orchard Road shopping district. The hotel is also ideally situated for business travellers, with some of Singapore’s largest corporate offices and the Suntec Singapore International Convention and Exhibition Centre close by.

The street was named after Sir Stamford Raffles, who came to Singapore after being Governor of Bencoolen (now Bengkulu) in Sumatra.

The S$145 million 538 room hotel is the largest ibis outside Europe and is being developed by LaSalle Investment Management. It will be managed by Accor, who earlier this year re-located its Asia Pacific headquarters to Singapore.

General Manager of the hotel, Puneet Dhawan, said: “The opening of the ibis will herald in a new era of international-quality economy hotel accommodation for Singapore.

“Singaporean tourism authorities are predicting 17 million tourists arrivals by 2017, and with the destination’s growing status as Asia Pacific’s tourism hub there has been an urgent need for quality, affordable accommodation in the heart of the city.

“While there are a number of hotel projects under way in Singapore, the vast majority are in the upscale or luxury sectors when the largest growth market is actually the economy sector – as with airlines. Singapore now has its own budget airlines terminal and is increasingly attracting low-cost air carriers to hub via Singapore, so there is a definite need for more internationally-branded economy accommodation. Existing hotels in the 3-star market are notoriously variable in standards, but the ibis Singapore brings with it the guarantee of one of the world’s largest economy hotel brands.

“We will be opening with a rate of S$148, which – given the hotel’s location and international branding – will make the ibis a very attractive base for both business and leisure travellers, and will help dispel the idea that Singapore is an expensive destination.”

The opening of the first ibis hotel in Singapore is part of the rapid expansion of the brand in the Asia Pacific region. It will be the 60th ibis to open in the region. ibis has a significant presence, and is rapidly growing, in all of Singapore’s top six inbound markets – Indonesia, China, India, Australia, UK and South Korea.


ibis, the worldwide economy hotel brand of the Accor group, offers consistent quality accommodation and services in all its hotels, for the best local value: a well-designed and fully-equipped en-suite bedroom, major hotel services available 24/7 and a wide choice of on-site food and beverage options. The quality of the ibis standard has been recognised by the International Organization for Standardization certification ISO 9001 since 1997. ibis is also the world’s first hotel chain to demonstrate its environmental commitment through securing the ISO 14001 certification, which has already been awarded to nearly one third of its hotels.
Established in 1974, ibis is the European leader and one of the first economy hotel chains in the world, with nearly 90,000 rooms and 800 hotels in 40 countries, including ibis Singapore on Bencoolen.
For additional information, please visit www.ibishotel.com

Accor, a major global group and the European leader in hotels, as well as the global leader in services to corporate clients and public institutions, operates in nearly 100 countries with 150,000 employees. It offers to its clients over 40 years of expertise in two core businesses:
• Hotels, with the Sofitel, Pullman, MGallery, Novotel, Mercure, Suitehotel, ibis, all seasons, Etap Hotel, Formule 1 and Motel 6 brands, representing 4,000 hotels and nearly 500,000 rooms in 90 countries, as well as strategically related activities, such as Lenôtre;
• Services, with 30 million people in 40 countries benefiting from Accor Services products in employee and public benefits, rewards and loyalty, and expense management.

check out my web page for more infomation about travel ... and come back here to see more about Singapore very soon
Posted by Heather - the Kiwitravelwriter at 5:23 PM