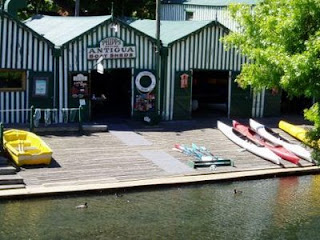 In 1850, swamp covered Christchurch, and settlers had to traverse bog to get home after shopping in the market.

Those early settlers must have been sorely disillusioned when they first saw the soggy land of their dreams,

Between 1000 and 1500, the indigenous Maori (who had arrived here from the Pacific) had a settlement here, called Puari. It stretched east from the Otakaro River, and was home for around 800 Waitaha people who gathered eels, whitebait, native trout, ducks, and flounder here.

The river was renamed the Avvon – after a Scottish river - then this too was changed to Avon, and the first bridge to span the river was a cart bridge in 1852. Ten years later the first public lamp was lit at the same market street bridge but kerosene was considered too expensive and the town lighting project was halted for two years. 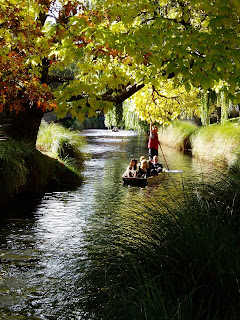 rom drowning, as some 30 people had drowned in what now seems an extremely placid river

Every weekend we Cantabrians (we who live in Canterbury, New Zealand) have holidays here in our own city. One of our time honoured ways of indulging in the warmer months here is boating on the Avon.

The centre of this fun is of course The Antigua Boat Sheds. Established in 1882 many generations of Christchurch people have spent time messing around in boats hired from them and I too learnt to row in the gentle waters of our river.

The boat-shed was built by a couple of boat builders and is one of Christchurch’s oldest buildings. Open all year, and with a cafe full of home-cooked food attached, it makes a great setting for all sorts of events - from weddings and cocktail parties to children’s parties- as well as a family fun day in the park.

Canoes and paddle boats are available for hire and you can also be punted upstream, through the beauty of the botanical gardens, - sipping champagne or tucking into a hamper of food is optional. You can also punt further downstream- leaving from the Kate Sheppard suffrage statue beside the Worcester Boulevard bridge down to the Manchester St area: restful and different ways to see our city.

The current owners of the Antigua Boat Sheds have enjoyed running this business since 1987. “It’s a life-style thing” I was told “our family loves not being confined to an office space”

So become a tourist in your own city, or welcome to our city, and go boating on our Avon River.
Posted by Heather - the Kiwitravelwriter at 6:02 PM

I love Christchurch and miss the place a lot - use to live there are great to read your blog post about the place!