New Zealand women get the vote in1893 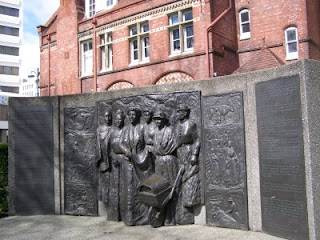 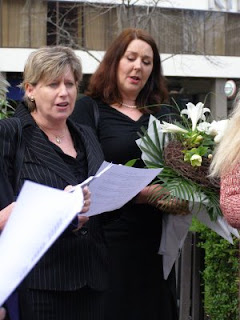 Women’s suffrage 1893 – New Zealand first in the world to give women the vote.

Yesterday, 19th September 2008 women in New Zealand celebrated, and remembered with gratitude, the struggle for the right to vote. (For detailed information of this see NZs online encyclopaedia http://www.teara.govt.nz/ )

Here in Christchurch we are proud of the fact that Kate Shephard was a prime organiser of the 31,872-signature petition (collected over seven years) and every year we gather at the memorial (cnr Worcester Boulevard & Cambridge Terrace) which depicts the women and the wheelbarrow in which the petition was taken to Parliament in Wellington. (see photo)

Suffrage day is often also called White Camellia day, as women who supported enfranchisement wore a white camellia, yesterday women both wore the flowers and lay them at the wonderful memorial. The memorial was unveiled at the 100 year anniversary and a new camellia verity was also created then and named ‘Kate Sheppard’. Yesterday we celebrated 115 years of all NZ women being able to vote.

So far, from my research, it seems only one of my ancestors, great-grandmother Elizabeth Rowe, (married Herbert Bunny) signed the petition and during that same year, 1893, her daughter, Mabel, my maternal grandmother was born.

One of the great things about the 1893 Electoral Bill was passed was that Maori women were given the vote too … not just women with land. Unfortunately Chinese women, in fact all Chinese people, did not get the vote until the early 1950s.

With our MMP method of voting however, New Zealand now has Asian members of parliament and look to have more elected during the next elections ( 8th November 2008).

Don’t waste the courage and strength of those 19th century women – make sure you vote.

Posted by Heather - the Kiwitravelwriter at 5:43 PM