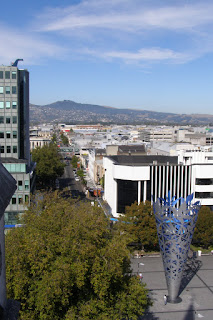 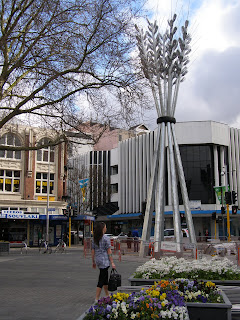 Christchurch is passionate about our public art. We all seem to have strong opinions, loving or hating each piece. We moan, celebrate or write letters to the editor about new pieces that are planned or installed.
In recent years a planned foot bridge was stopped because of the cries of complaint. (However our current City Council seems bent on rushing things through and ignoring the ratepayers’ voice.)
Yesterday I went to see the newest piece of art (above right) in Christchurch erected on the corner of High, Colombo and Hereford Streets. Called Flour Power it’s a fine piece of work but … what on earth is a bunch of tall wheat stalks doing on a site that was once a swamp? How is that relevant to Christchurch city? It was the plains that grew the grain, not the very wet site of the British-planned town that was plonked down in the middle of a swamp.
The Chalice (pictured above also) in the city’s square is a great piece of work although I have never thought it was in the right position. I’m revising my condemnation today because at least that has relevance to the site: depicting leaves of plants that once grew in the area.

I note that Stuff (http://www.stuff.co.nz/4646107a6009.html ) questions Flour Power. Asking if it is a plant form, a techno-tepee or a towering contemporary icon? What do you think?
Posted by Heather - the Kiwitravelwriter at 1:03 AM